You are here: Home / Archives for Vintage Homeware / Gothic Style 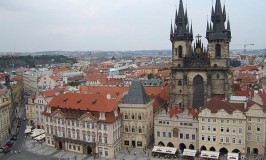 Gothic Church overlooking the main square of Prague in the Czech Republic – Noble Piranha ‘Gothic’ is a term which first appeared in the 16th century. People used it to name the architecture, sculpture and paintings created during the 12th and 13th century. Gothic Era embraced almost every country in Europe. So, in order to […]